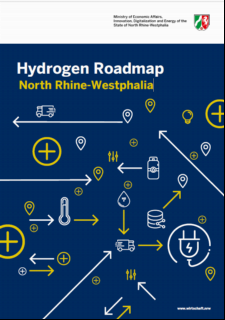 With the hydrogen roadmap presented here, North Rhine-Westphalia shows that achieving the Paris climate action targets and strengthening the economic and industrial location can go hand in hand. A quarter of the current CO2 emissions in North Rhine-Westphalia can be saved by hydrogen alone.
Numerous studies show that hydrogen plays a key part in an economically cost-efficient and climate-neutral energy system. Depending on the scenario, the bandwidths range from 250 to 800 terawatt hours (TWh) of hydrogen demand per year in Germany. Hydrogen is essential for many processes in energy-intensive industry. Hydrogen is also expected to be needed in the mobility sector, for example in buses or trucks, and in the energy sector, for example in gas turbines. Large quantities of hydrogen are primarily required for our energy-intensive industry.

1. International markets for hydrogen
and power-to-liquids Analyses carried out by Forschungszentrum Jülich (FZJ) for this roadmap show that a secure and cost-efficient energy supply in Germany and North Rhine-Westphalia can only be achieved in the medium and long term with considerable import volumes. For Germany, the demand for hydrogen and liquid fuels and raw materials (power-to-liquids) will add up to almost
900 TWh per year by 2050 (Figure 1). About 75 percent of this demand will probably be covered by imports.
North Rhine-Westphalia has an even higher import quota of almost 90 percent here, which makes it clear that we cannot cover our energy and raw material requirements for a climate-neutral economy with the local renewable capacities alone. North Rhine-Westphalia is and remains an energy importing state. According to FZJ calculations, North Rhine-Westphalia‘s hydrogen demand amounts to
a total of 104 TWh per year, of which roughly 18 TWh are generated locally (Figure 2). The majority of North Rhine-Westphalia‘s demand, at around 42 TWh per year, comes from the industrial sector. Mobility and the electricity generation also play an important role at 33 and 26 TWh per year respectively.
Due to this gap in coverage, we intend to focus specifically on building international partnerships in the next few years in order to be able to meet the growing demand for hydrogen. Possible export countries are the European North Sea states, the existing export countries for fossil fuels or new regions such as North Africa. But across the board, the development of a European market at least for internationally tradable, climate-neutral raw materials
will also become very important in order to be able
to cover the demand in Europe. North Rhine-Westphalia will support this federal government and European Union (EU) development task, just as we already play a crucial role as a consumer and distribution hub, for example for natural gas.